We were genuinely concerned about visiting Mexico, given the increasingly fearful stories we were hearing and reactions of‘’Really?!?!’’ …. ‘’With 2 small children?’’ or ‘’My Goodness be careful….’’ ‘’You look after your own now’’ … that we got from 99% of the Americans we spoke to when we mentioned that we were headed south across the border.

Despite the continuous warnings, we crossed from Texas into Mexico at the border Reynosa. Lets face it nothing’s keeping Sophie from a margarita on a white sand beach! As we headed along the empty road to the Mexican Border we were struck by the HUGE traffic queues of cars waiting to get back into the US. There are a few hours of paperwork to get through, a cursory inspection that we weren’t harboring illegal immigrants in the bathroom (Jonah can barely fit in there) and a quizzical customs officer who I swear said “seriously ….a sofa …on the back of your RV”!

Given all that we’d heard, we were supposed to be at the border as it opened, to give us as much time to reach the first RV park some 300 miles south….but you know us… Last Minute Larry’s, we were still shopping for a Mexican sat nav and printer cartridges at 9.30am. And a map. In fact, we still don’t have a map.

We drove south for 8 hours to get clear of the border and its reputation. The police travel fast, in open back jeeps, stood up in the back holding on, dressed in black uniforms, balaclavas, sunglasses and machine guns. And we saw A LOT of them. Oddly not a reassuring sight!

More happily there were one legged motorcyclists…

(less happily he had the same on the other side)

Being overtaken by double yes double articulated lorries …..who push in the minuscule space between us and the lorry directly in front and if you look v carefully there’s another one coming the other way….(photo not a fluke …IT WAS A REGULAR OCCURRENCE)

A huge pilgrimage of cyclists laden with religious effigies….. 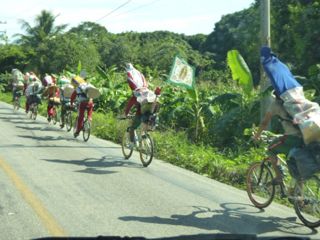 Even campervans more overloaded than ours….(no sofa though hey Russ)

Pot holes so large we weaved like weaving weavers …

We arrived at our first Mexican RV park (strangely we were the only people there) our smug self congratulations at making it through the ganglands of Mexico ended abruptly at the sounds of gunshots from the next house!! We were up and gone by 7am!! Turns out we were the only RV heading south that week. Either the RV parks were closed, abandoned or when they did exist and were open, we were the only ones there. Eeerie and unsettling.

The big plan came through though, six days of almost non stop driving 6 to 9 hours a day, averaging 37mph for 1500 miles and all with NO MAP!

Roads so bad that Milo’s tooth fell out.

and spend 10 glorious days with Sophie’s bro Matt, his wife Anna, the 4 cousins, Leo, Finn, Joe, Pascal and Leo’s girlfriend Paris, that made 13…Yes a fair bit of washing up! 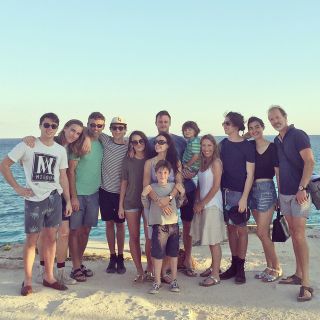 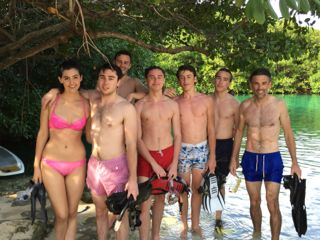 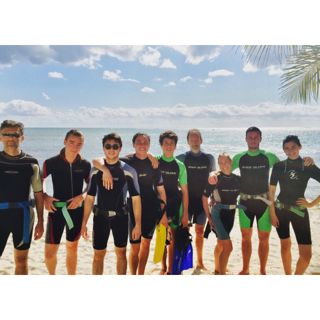 Russ visited an estate agent to talk about property he can’t afford….

We’re now parked up in the car park of an RV park (next to the transmitter mast in order to get intermittent snail like wifi) just north of Tulum, catching up on research for the next leg, homeschooling the boys and teaching Jonah to swim. 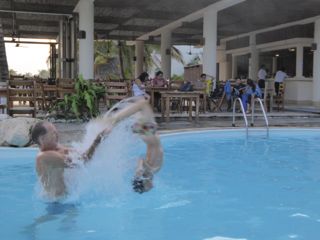 We’ll stay here for a bit till we strike out for Belize. We’re on the beach, there’s a bar and a pool, 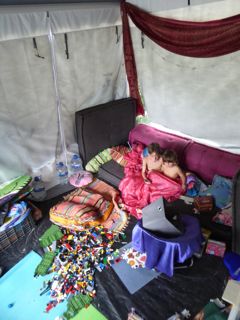 The weather is warm and tropical..
We get on pretty well as a family. Sophie and I get on as well as a man and a woman can, as long as she can still keep in regular touch with her friends (danbysophie@gmail.com) and I meet a steady stream of blokes I can banter with (thank you Graham, Will, Malcolm, Sam, Billy, Matt, Leo, Finn, Joe and ‘Scal ). Milo Always puts himself out there, playing and interacting with other adults & children regardless of their age or nationality and with mixed results. Jonah is just still being cute oblivious Elsa singing Jonah. Life is good, we’re alive, we made it through the Mexican cartel lands! 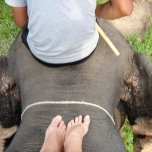